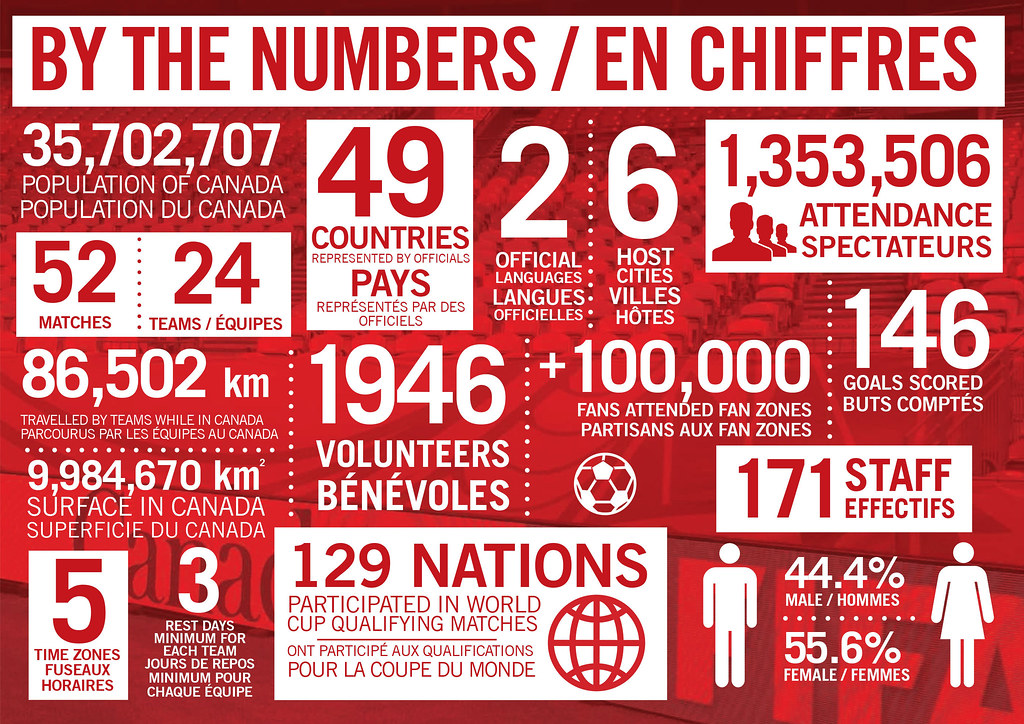 It was a once-in-a-lifetime experience, with the world's focus turned to our nation for the 30-day FIFA Women's World Cup Canada 2015™ finals from 6 June to 5 July. Canada were terrific hosts, executing a flawless tournament, delivering a professional environment, and of course serving a warm, hearty welcome to the world's beautiful game.

To Canada 2015's credit, the coast-to-coast competition drew a record-setting crowd, generated nearly half a billion dollars in economic impact, and attracted a worldwide television audience of more than 750 million viewers.

For the first time ever, Canada hosted a competition from coast to coast across the country - from Vancouver on the Pacific coast to Moncton on the Atlantic coast. The competition also crossed five time zones, another first for a FIFA event.

By drawing 1,353,506 cumulative spectators over 52 matches, the FIFA Women's World Cup Canada 2015™ set both a record for the competition as well as a record for any FIFA competition other than the men's FIFA World Cup. The tournament averaged 26,539 spectators per match, with seven matches recorded over 50,000 spectators.

From the opening match on 6 June, Canada set an attendance record for the highest spectator total for a Canadian national team match - of any sport - on home soil. The 6 June attendance at Commonwealth Stadium in Edmonton was 53,058, surpassed two more times for Canada matches on 21 June (53,855) and 27 June (54,027) at BC Place in Vancouver.

The average attendance for Canada's five matches was 48,380, with three of the matches over 50,000. In terms of performance, Canada finished in sixth place at Canada 2015, which combined with quarter-final finishes at the FIFA U-17 Women's World Cup Costa Rica 2014 and FIFA U-20 Women's World Cup Canada 2014, made Canada the only nation in the world with top-8 finishes in FIFA's three women's competitions in 2014-15.

In all, a record 129 nations competed in the FIFA Women's World Cup Canada 2015™, with the qualification matches played over 20 months from 4 April 2013 to 2 December 2014 in 179 cities in 79 countries. In Canada, a record 24 finalists played the finals over a record 30 days, with 52 matches played in the six host cities: Vancouver, British Columbia; Edmonton, Alberta; Winnipeg, Manitoba; Ottawa, Ontario; Montréal, Québec; and Moncton, New Brunswick.

The event supported an economic impact of $493.6 million industry output, $241.1 million in gross domestic product, and $97 million in taxes. The event also supported 3,154 full-year jobs and engaged 60% of Canadians aged 9-17 years old. As part of the competition's legacy, there were 24 FIFA Quality Pro football surfaces featured, with notably the 18 training fields now available for use by the six Canadian communities.

In the month of June, Statistics Canada tracked a 0.5% increase in real gross domestic product (after it had fallen for five consecutive months) as well as a 6.4% increase for the arts and entertainment sector. In the Province of British Columbia, hotels were sold to 99% capacity over the course of the competition.

The competition generated 20 million visitors to FIFA.com/Canada2015 and 28 million views on Youtube. With nine billion impressions on Twitter, it was the third-highest ranked sport during the 2015 calendar year.

The FIFA Women's World Cup Canada 2015™ was a landmark event for Canada, for the sport of football, and for women around the world. True to the competition's slogan "To a greater goal," the competition put the spotlight on women's sport. "To a greater goal" captured a dual message that embodied the essence of the world-class competition: one directly connected to the field of play and another for humanity.