Sport Chek National Championships U-18 Cup kicks off in Vaughn

Posted on 6 October 2016 in National Championships

The U-18 Boys Sport Chek National Championships got under way in style, as the marquee night game at the Ontario Soccer Centre drew in a large crowd to cap off an eventful first day. As the Woodbridge Strikers, the Ontario Boy’s representative, put on a show in front of their boisterous home crowd, it was the team from Quebec, who played earlier in the day, who were also making noise on the first day of competition.

Coquitlam Metro Ford SC (BC) vs Bonivital SC (MB)
Coquitlam Metro Ford SC had the first good chance of the game on a Jacob Low free kick. The shot, taken from the edge of the box in the 23rd minute, was saved by Manitoba’s keeper Zachary Kirouac. Moments later Manitoba’s Imani Bujiriri found himself in alone after a clever turn but his point blank shot was saved by Coquitlam’s Jared Horvath. Coquitlam grabbed the game’s first goal in the 66th minute when Joshua Penny rose above everyone else off a corner kick and buried his header in to the back of the net. In the dying seconds of added time, Bonivital was pressing for the equalizer and thanks to a tremendous individual effort by Charles Kaniki, it resulted in the game’s tying goal. That’s the way it would finish as Coquitlam Metro SC tied Bonivital SC 1-1.

Halifax City (NS) vs Calgary Foothills (AB)
Halifax City opened the scoring in the 23rd minute when Alex Black did good work to get himself open and his shot fooled the Calgary Foothills keeper Jordan Kasian for the game’s opening goal. Calgary would equalize after the re-start of the half, when a clever set piece found the head of Caleb Johnson and he made it 1-1. Calgary would take the lead and make it 2-1 in the 64th minute when Mason Ogoke outjumped Halifax keeper Jack Nielsen on looping bounce and headed the ball into the back of the net. That would be all Calgary needed as they shut the door the rest of the way, winning 2-1.

Moncton Codiac U-18 (NB) vs CS Repentigny (QC)
Moncton Codiac carried much of the play in the first half but it was CS Repentigny that was the first to break through. Olivier Marsolais’ free kick goal just before the half fooled Moncton keeper Christian Masimengo to make it 1-0 for the side from Quebec. CS Repentigny would increase their lead in the 50th minute when Xavier Langlois danced his way through numerous Moncton defenders and slotted home his side’s second of the day making it 2-0. Langlois pushed their lead to 3-0 when he slotted home second of the day just six minutes later. Benjamin Nadeua kept things rolling for the Quebec side as he poked it past the outstretched legs of the Moncton keeper and tapped it in to make it 4-0. Moncton would pull one back before the final whistle when Jonathan Kalulumia struck a bullet of a free-kick to the far post making it 4-1. CS Repentigny’s David Dugalnormand sealed it in extra time for Quebec, making it 5-1, and putting an exclamation point on their opening day.

Woodbridge Strikers (ON) vs Winsloe-Charlotteown Royals (PE)
The Woodbridge Strikers got off to a bright start when they opened the scoring in the 7th minute of their tournament’s opening match. The Strikers’ Jonalec Duenas Toromoreno found a way in behind the Winsloe-Charlottetown Royals defence and made no mistake by burying his shot into the far corner to make it 1-0. The Strikers increased their lead 10 minutes later when Omar Hoffman converted his chance in the box making it 2-0. Toromoreno kept things rolling a few minutes later. The Royals keeper Alex Hall was able to make the first save but the rebound came to the foot of Toromoreno and he curled his shot into the upper right corner to make it 3-0. It was more of the same after the restart as Woodbridge increased their lead to 4-0. Following a corner, the ball bounced off a few bodies before finding the head of Joshua Pedretti who tucked it into the corner in the 48th minute. Nathan Dosssantos would add another a few minutes later to make it 5-0. Daniel Korkis’ tremendous strike made it 6-0 and capped off a strong performance from Woodbridge on opening day.

The first day of the U-18 Girls Sport Chek National Championship was played out under bright, sunny skies at the Vaughan Grove Sports Centre in Vaughan, Ontario. The opening three games all ended 1-0, with the fireworks saved for the last game of the day when a Samantha Hayes hat-trick powered Kitchener Spirit to a win over St. John's SC.

Varennes (QC) 0 vs. 1 Coastal FC (BC)
Varennes exerted the early pressure in this game, with Alexiane Marquis and Karima Lemire in particular providing a goal threat throughout. For their part, Coastal FC were defensively resolute whilst Ahsley Burgess did well to pull strings in midfield. The breakthrough came in the 59th minute when Jessica Williams lofted a ball over the advancing defence for Danielle Steer to chase. She beat the offside trap and deftly lobbed the onrushing keeper to give her team a one goal lead which they wouldn't relinquish.

Edmonton Internazionale (AB) 1 vs. 0 Saskatoon Celtic (SK)
This inter-prairie matchup appeared to have been settled early when Edmonton Internazionale took the lead in the 26th minute. Christina Bruni floated in a wonderful cross from a free kick on the left flank. The ball was attacked by Edmonton captain Erin Vandoler, and the header flew into the top right corner. Internazionale looked to extend their lead, but Saskatoon Celtic held firm with Raeann Ballantyne making several good saves to keep her team close.

FC Northwest (MB) 0 vs. 1 Halifax County United (NS)
A strong travelling support watched Halifax County United eke out a choppy 1-0 win behind a 17th minute goal from Breanna Roach. The forward pounced on a loose bouncing ball inside the area and swept home a finish into the bottom right corner. The game was very even throughout, and FC Northwest carved out two wonderful opportunities to tie the game up, Katelyn Fines doing well to keep out Holly Angus' attempt.

Kitchener Spirit (ON) 3 vs. 0 St. John's SC (NL)
Kitchener Spirit scored just before the half and immediately following to grab control of their match against St. John’s SC. They opened the scoring in the 34th minute when Gabrielle Sica sent a long free kick over to the left side of the field from the right touchline. The ball beat the offside trap, and Samantha Hayes was able to finish with a volley after one bounce. Kitchener extended their lead five minutes into the second half when Hayes receiving the ball in the penalty area with her back to goal. She twisted and turned to make the space before coolly slotting into the bottom left corner. St. John's posed a goal threat of their own throughout the game, largely through the pace of Holly O'Neill, and forcing Kitchener to be sharp to keep their clean sheet. Hayes completed her hat-trick in the 60th minute, just beating out the St. John's goalkeeper Doyle Taylor to a through ball, making it 3-0. That was all they needed and Kitchener closed out the game to win 3-0. 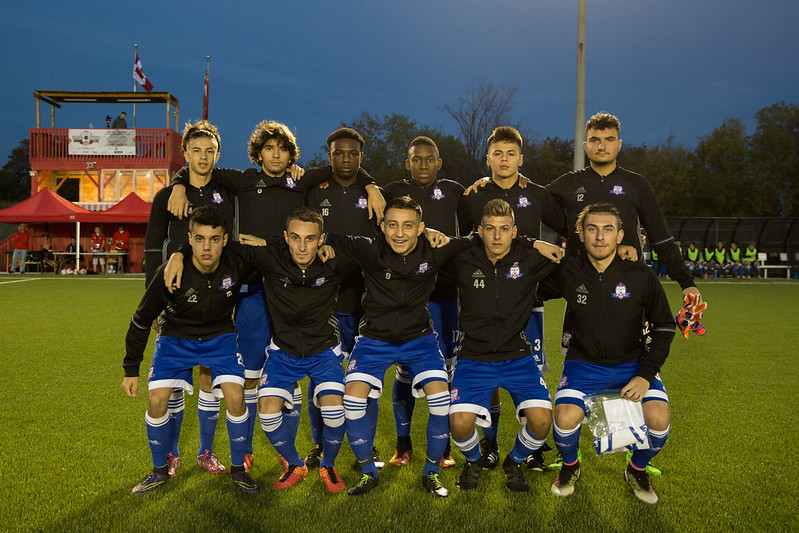