Under sunny skies and gusty winds, eight of the ten women's teams got things underway in St. John’s, Newfoundland Labrador at the 2016 Sport Chek National Championships. There were no apparent upsets on opening day of the 2016 Jubilee Trophy. Richmond FC, Edmonton Northwest United, Scarborough GS United, and Royal-Sélect Beauport were all winners on the opening day.

Group A - Edmonton Northwest United (AB) 2:0 (NS) Halifax Dunbrack
The Maritime team Halifax Dunbrack could not find a way past the Edmonton goalkeeper Emily Burns. Instead, it was Raeghan McCarthy and Tanya Boychuk who scored the goals for the Alberta champions. It’s a strong start to their campaign at St. John's 2016 after they eliminated the three-time defending national champions Edmonton Victoria SC in the Alberta provincial championship last month.

Group A - Richmond FC (BC) 1:0 (SK) Saskatoon SK Impact FC
Saskatoon Impact FC did not lay down to the mighty Richmond FC of British Colombia. In fact, the team from the Prairies took the game to the west coasters for much of the first half. Saskatoon's star of the match Leanne Mylymok controlled the midfield and distributed lovely balls to her teammates all afternoon. Having numerous attempts herself at goal, it was not meant to be on this day.

In the 77th minute, Richmond FC's Caitlin Davie scored the lone goal of the game. Kicking into the wind, Rachel Ramsden sent a beautiful corner into the box finding the head of Davie. Davie headed it down to the ground narrowly beating Saskatoon goalkeeper Codi Corrigan. After the game, Davie underlined the feeling of "relief" after scoring the goal.

Group B - Royal-Sélect Beauport (QC) 4:0 (MB) Winnipeg WSA North Stars
Beauport attacked relentlessly against the Winnipeg defence who had no answer. Scoring goals in the 5th, 14th and 25th minutes all but sealed the match by halftime. Léa Chastenay-Joseph scored the first two goals off breakaways. She got a bit lucky on the first goal, beating the goalkeeper through the legs. The second goal was scored after two moments of brilliance: first, Joëlle Gosselin gift wrapped a lobbed pass over the defence; next, Chastenay-Joseph gently chipped the ball past the goalkeeper and into the back of the net.

Up 2-0, it was Gosselin’s turn to score one of her own. Teammate Rachel Collard whipped a ball into the box and Gosselin clinically headed it home. Beauport almost made it four when Joëlle Mercier had her free kick come off the bar. Nine minutes from time, however, they did get their fourth: Marie Parent charged a free ball in the box and smashed it into the roof of the net. 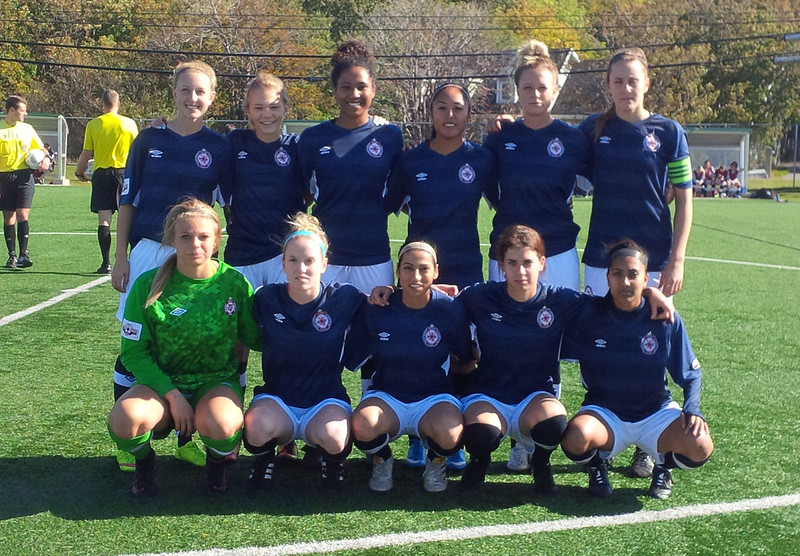